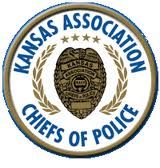 Kansas Association of Chiefs of Police

​The colorful frontier history of law enforcement in Kansas includes names such as Wild Bill Hickok, Bat Masterson and Wyatt Earp. James Butler Hickok served as Ellis County Sheriff and, at another time, Marshal of Abilene. William Bartholomew Masterson was sheriff of Ford County and later became Peace Commissioner of Dodge City. Wyatt Earp was involved in law enforcement in both Dodge City and Wichita. These early Kansas "Peace Officers" relied on their reputations and individual skills to perform their law enforcement duties effectively. Both individually and collectively they left a deep and decisive imprint on justice in Kansas in the 1870's and 1880's.
​
In the more than 100 years since, law enforcement in Kansas has evolved and progressed to its present-day level of effectiveness and professionalism. This progress is due, in great part, to the wisdom and guidance of many dedicated law enforcement leaders. Among those are the nineteen chiefs of police from across the state who met in 1964 to discuss and, ultimately, lay the groundwork for establishing a professional association "dedicated to the advancement of law enforcement". As a result of this meeting and subsequent efforts over the following few months, official Articles of Incorporation were drafted and filed with the Kansas Secretary of State on May 21, 1965.
Original signers of the KACP Articles of Incorporation were Chiefs John Kenyon (Overland Park), Frank Robertson (Arkansas City), Ramon House (Dodge City) and Jack Molden (Emporia).
​
The KACP Articles of Incorporation provide that KACP is a non-profit corporation organized "to secure a closer official relationship amongst police officials throughout the state, to secure unity of action in police matters; to elevate the standard of police institutions and the police profession generally; to pursue humane efforts in the enforcement of laws; to encourage the advancement and perfection of a uniform police system within the State of Kansas: to advance along all lines pertaining to the prevention and detection of crime and the identity and treatment of prisoners; and to encourage cooperation with any other professional police organization who supports the above aims and purposes, to solicit and receive funds for the accomplishment of the above aims, if necessary, and to buy, own or sell property, real or personal, for the accomplishment of the above aims, if necessary."

In the 40 plus years since its birth, KACP has grown from its original 19 to over 400 members. Numerous worthy programs and valuable services have been developed, implemented, improved and expanded as reflected elsewhere in this web site. What hasn't changed is the drive and dedication of Kansas law enforcement leaders to improve effectiveness and ensure professionalism.